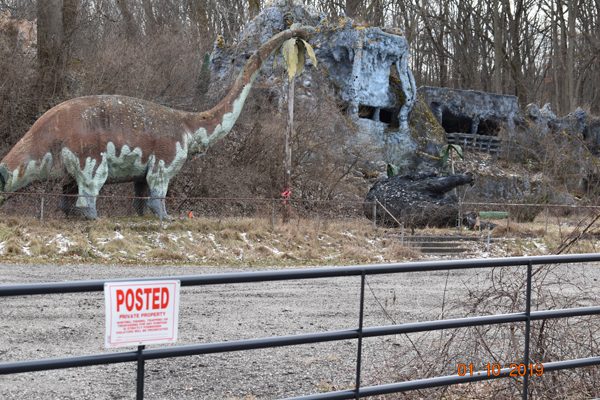 While the old Prehistoric Forest tourist attraction grounds are clearly posted, people still frequently trespass. Officials say the ‘mountain’ in the background is a dangerous building.

Cambridge township officials are hoping they have the power to move mountains or at least get one mountain made safe to the public.

The township has determined that the faux mountain at the old tourist attraction at 8203 U.S. 12 is a dangerous structure. It has fallen down inside, they say, and presents a hazard to the public. The property is easily accessible from the highway and is an attractive nuisance, say, officials, noting that the police have often had to respond to the site.

Sandra Crabb, the owner of Prehistoric Forest is being requested to appear at the February Cambridge Township board meeting to see what her plans are to improve one building on the property.

“We gave the owner of the property until December 31 to meet the requirements, and it hasn’t been done,” said Clerk Rick Richardson at the Jan. 9 township board meeting.

Richardson noted that Crabb’s representative, Jerry Cochran, appeared at a previous hearing and presented bids to have the structure razed, which cost between $36,000 to $68,000. Nothing has happened since.

The board scheduled a public hearing for Wed., Feb. 13 at 6:30 p.m. to see why she hasn’t complied and plan a course of action.

Prehistoric Forest, a former tourist attraction, has been closed since 2002.