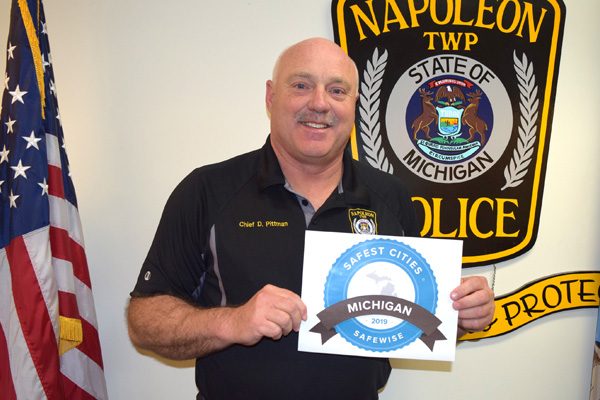 Above: Napoleon Township police chief Duaine Pittman holds an award indicating that the township is one of the safest “cities” in Michigan.

Napoleon Township residents can rest assured they’re living pretty safe. The township is the 9th safest city in Michigan according to the organization SafeWise, which just released its fifth annual Safest Cities report.

“To be recognized – especially to be in the top 10 – is a huge honor for the community and the police department as well,” said Napoleon Township police chief Duaine Pittman. “That’s pretty awesome.”

The report indicates that Napoleon Township is new to the list, but Pittman noted the township has been on comparable lists in the past. The township was the only municipality in the Irish Hills area that made the top 20.

The next area municipality on the list was Spring Arbor Township that came in at number 26, while Adrian Township took the 36th spot. Cambridge Township checked in at number 63, while Columbia Township was number 115. Not all municipalities participate in reporting data.

“Half of the safest cities in Michigan are brand new to our list this year,” says Rebecca Edwards, a safety analyst for SafeWise. “It’s always encouraging to see different cities making strides to improve the safety of their community.”

“I’m super proud, not only of our department, but also of our community. The citizens of Napoleon are obviously conducting themselves in a good fashion in order for us to be ranked,” Pittman said. “It means that the people in the community are doing what they’re supposed to be doing, which is what makes Napoleon a great place to live and work.”

To identify the cities with the best safety records, SafeWise analysts looked at the number of violent crimes reported in the 2017 FBI Unified Crime Report, the most recent data available. They also calculated the number of violent crime incidents per 1,000 people in each city. Analysts established population thresholds, and, in the event of a tie, property crimes were considered.

SafeWise named Grosse Ile Township the safest city in Michigan with zero reported incidents of violent crime and only 2.88 property crimes per 1,000 residents. Beverly Hills jumped up five spots to claim the second safest city in the state, and Houghton was new this year, ranking at number three.

To be recognized – especially to be in the top 10 – is a huge honor for the community and the police department as well.

“As far as those types of situations, they are few and far between,” Pittman said regarding violent crimes in the community. “We’ve always been pretty fortunate not to have major incidents and, knock on wood; we won’t have any, any time soon. I hope it has a lot to do with the visibility of the police department. We try to patrol the neighborhoods and try to make sure people know we’re in the neighborhoods.” (More below)

Pittman said his department does a lot of vacation checks for people who are out of town to make sure that it’s not attractive for someone to think about breaking into a home or committing a robbery or a breaking-and-entering.

“We try to be on the road as much as we can so that it kind of deters those opportunistic criminals that might think it’s a good idea, but say, ‘I think I just saw a police car go by so I’m not going to do that.’”

If the community is already safe, why are they requesting a millage?

In addition, a fire apparatus and housing millage of .75 mills will be put on the May 2020 ballot.

With the proposed millage, one might ask ‘Why would the ninth safest city in Michigan need more resources and staffing?’ To which Pittman replied, “Ninth is great, but I’d love to be number one. In this line of work, you should always be trying to get better and do things to improve your relationship with the community and your visibility in the community, and make sure your reports are handled and sent to the prosecutors, and you’re getting your follow-up done and doing police work A to Z.

“I think we can do better, and I think we should.”

The chief added that Napoleon is not going to be able to keep good police officers if the township can’t afford to pay them a decent wage.

“Retention of those officers is huge,” he said. “That’s one of the big issues with the millage – to try to get the pay up to a standard where guys aren’t leaving to make a couple dollars more. Obviously, a little more manpower and a little more money and providing better equipment will help us retain officers, and make sure we’re giving the community the best bang for their buck that we can.”

Pittman said there are benefits to working in a rural area police department that can also help in retaining good officers.

“The nice thing about out here is that you generally have more time to spend with the victim of a crime or on a report, or being in a neighborhood, because we don’t have the high call volume that some of the [bigger city] agencies do. Nor do we have the population that some of them do.”

“They do a tremendous job and have kind of fallen in love with Napoleon. We try to make the atmosphere here an enjoyable place to work.”

Key findings from the Safest Cities in Michigan Report include:

To see the full SafeWise report for Michigan, click here.

The 20 Safest Cities in Michigan