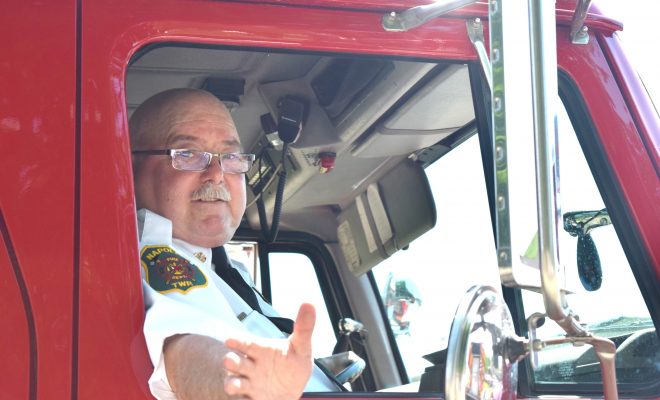 Above, Napoleon Township Fire Chief Jay Hawley proudly rides in one of the township’s fire fleet during Napoleon’s Memorial Day parade in 2016.

He’s probably the most well-known person in Napoleon Township because he’s been around Napoleon for a long time. He’s Fire Chief Jay Hawley, who will no longer be fire chief come Oct. 1.

Hawley, who has been at the helm of the Napoleon Township Fire Department since 1974 at the ripe age of 24, officially announced his retirement with a letter and announcement to the township board at its Aug. 11 meeting. He will be retiring on Sept. 30, 2020 at the age of 70.

“As you know, Napoleon Township Fire Department has been a part of my life forever,” Hawley stated in the opening line of the letter. That sentence speaks truth and it speaks volumes. Hawley’s dad was one of the original organizers and a volunteer for the department in its infancy.

“Over the last year, I have been working with Supervisor Dan Wymer and Assistant Chief [Greg] Bickford on developing a plan to allow for a smooth transition into retirement,” Hawley says near the end of the board letter. “I think we have achieved this and I feel good about it.”

Then came the opportunity for Chief Hawley to speak at the board meeting about his pending retirement.

“It’s been a great career and I think we did good,” he said. “I can’t tell you how many lives we’ve saved, how many structures we’ve saved, how many kids we’ve kept from getting hurt [speaking at] the school. It’s real rewarding, and like I said in my letter, we’re leaving the fire department in a good spot. And that’s where I wanted to leave it.”

“I thought it was a really nicely written letter – a very positive tone,” he said. “It really covered the highlights of your career in a very nice way.”

“We appreciate all you’ve done all those years,” said Trustee Julie Wilson.

“I think it’s kind of a small way to say ‘thank you’ for 46 years of service, and as Jay mentioned, an untold number of lives saved, structures prevented from burning down, and rescues made,” Wymer said.

The next topic turned to who would replace Hawley upon his retirement. Wymer spoke about Assistant Chief Greg Bickford as being a likely next chief.

“We’ve gotten to know him and have seen the kinds of things he can do,” he said. “I really think he’s a logical choice for our next fire chief. I have a lot of confidence in Greg. I’m going to recommend that we sort of view him as the lead candidate.”

Wilson asked if the township was legally required to post the job.

Wymer also spoke about the recent millages Napoleon Township voters passed by wide margins – a fire and police operational millage in Aug. 2019 and a fire equipment millage in May 2020.

The board set Tuesday, Sept. 8 at 5 p.m. to hold a public interview of Bickford for the Napoleon Township fire chief position.

In other fire department news, the board approved the sale of Truck 1, a 1994 F-250 grass rig with a snowplow and Engine 3, a 1996 Pierce/Freightliner Rescue Engine. The two fire vehicles are being sold as part of the department’s equipment replacement plan with the new fire equipment millage in place. They are being sold on GovDeals.com, where the Napoleon police department has had good success selling used police cars, in an effort to reach a larger pool of prospective buyers. If bids on the site do not reach the required minimum after a two-week list, Hawley said the department will sell them locally.

With the township’s 2020-2021 fiscal year budget approved that began July 1, the board approved the fire department’s request to implement wage increases for the three fire department captains, retroactive to July 1. The increase is from their previous rate of $1,933 per year per, to $2,450 per year. The raises were discussed by the board and budgeted for during the five-year millage operations meetings.

“The captains have a large amount of responsibility managing the firefighters on each of the three squads, being on call for 24 hours during the weekends, and making sure their firefighters are ready to perform in a safe and competent manner for our community,” Chief Hawley stated in a memo to Wymer shared with the board.