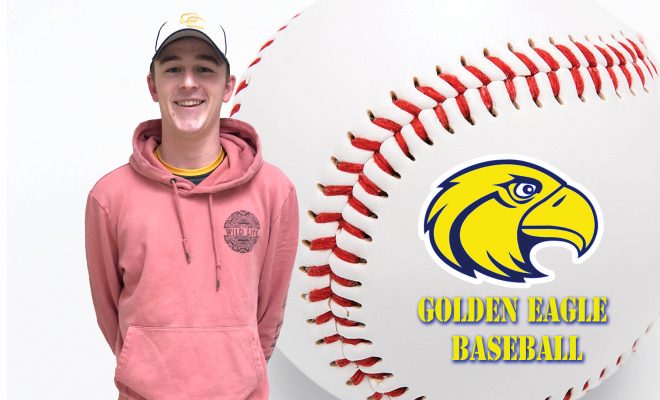 Above: Chase Tompkins is the Knutson’s Athlete of the Week. The short stop hopes to exceed last year’s mind-boggling .450 batting average.

One of the biggest stereotypes in high school sports is the narrative that coaches favor their child. But Columbia Central Senior Chase Tompkins and his father break that stereotype.

“Outside baseball, he’s my son. But on the field, I am still his coach,” says Golden Eagles Head Coach Steve Tompkins.

Chase plays shortstop for the Golden Eagles and even does a little pitching for the team. A varsity baseball player for four years, Tompkins also has played football, basketball, and soccer in his high school career. Even with all this time consumed by sports, the senior still finds a way to let loose and have fun.

“I love to hang with my friends. I like to make it fun while we play. I make a lot of jokes so the underclassman aren’t nervous going up to bat.”

Many people believe baseball is a dry sport and that it needs to be shortened. For Chase, this is not an issue. Tompkins and his team scream for their teammates from the dugout.

“Our dugout never stops talking and cheering for our teammates. Later in the season it gets really hot and everyone wants to go on the lake, but we just keep having fun.”

As a junior, Tompkins batted a mind-boggling .450 average, but for Chase, he wants more.

“I hope to get a batting average over what I had last year and make a few less errors. I definitely want to achieve all-state honors.”

As a team, the Golden Eagles have not won the district since 1997, and they have their sights set at ending that drought and also winning a LCAA title, which is one of the toughest conferences in the state. Coach Tompkins spoke on how important it would be for them to win the conference and districts this year.

“The LCAA runs very tough, but I think we have a good chance at it. Then we’d like to move on and win districts from there, which we have not done since 1997, so it’s a big goal for the team and our seven seniors.”

The Golden Eagles coach also believes his son is a very smart player for the team.

“He’s a great teacher, if I am in the dugout and he is on the mound, I do not have to visit because he has it under control.”

Chase’s biggest influence in his life is his speech teacher, Mr. Vitale. Why? Just like Chase, as he is a fun, joking person. On the field, Chase tries to emulate Major League second baseman Brandon Phillips who also carries that joking, enthusiastic demeanor.

While Tompkins is undecided on where he will attend college, he plans on earning a business degree and hopes to maybe walk on to a team to continue baseball, as it is one of his biggest passions.

In the classroom, Tompkins thrives, even with his tight schedule.

While baseball practices are just beginning, it is already clear good things a brewing for the Golden Eagles baseball team. 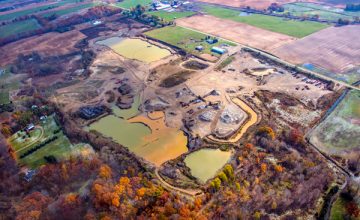 Above, This aerial photo gives an overview of the gravel mining operation located on Bohne Road....