Soldano shares the man behind the movement 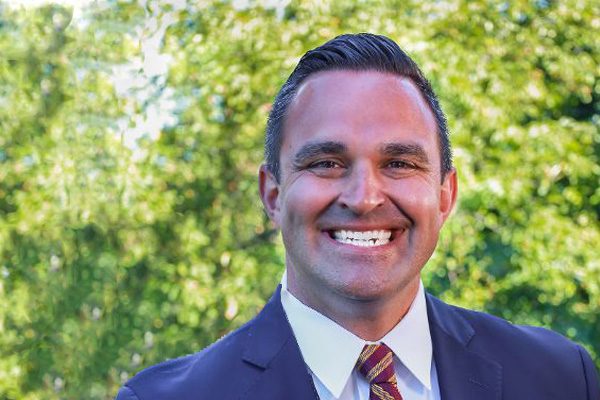 Above, Garret Soldano, chiropractor, author, family man, unexpectedly found himself at the head of a movement to defend citizen rights and set reasonable limits to executive power in the Michigan government.

Editor’s note: Garret Soldano’s business has been attacked, smear articles have labeled him as a militant, and fake testimonials have been left on his business page since becoming involved in Stand Up Michigan.  One man started a petition hoping the Michigan Department of Licensing and Regulatory Affairs would revoke Soldano’s chiropractic license under the claims that he had created “COVID-19 misinformation and anti-social distancing group.” His business has been vandalized, and he has received numerous threats. Yet the upbeat Soldano is charging forward for what he believes in.

We thought our readers would enjoy an article on what makes the Onsted native tick. The following is a snapshot of his life that focuses on his personal perspective.

When Garret Soldano opens his laptop, two reminders are taped inside. The first is a fortune cookie phrase: “Persistence will pay off.” The second simply states “Be authentic.” Soldano reads these maxims every day and before every interview – and that has been often these past four months.

On April 9 the impromptu creation of a Facebook group allowed him to vocalize his frustrations with increasing state government restrictions. Before going to bed, he felt comforted that 500 people had joined his group. This suggested he was not alone in questioning how things were transpiring. By the following Monday, the number had grown to 5,000. Within a few weeks, nearly 400,000 members had joined the page, and a movement was born. Soldano found himself at the epicenter.

“We didn’t realize at the time how special it was. The group gave everyone a platform to voice their frustration – a healthy thing,” he said. First came the solidarity, and next came to the realization they could make a difference. “We would do a call-to-action like encourage everyone to email their senators” regarding a specific restriction the governor was suggesting, said Soldano. The group coalesced with purpose and evolved into Stand Up Michigan.

The son of a retired army colonel, Soldano grew up thinking he would serve in the military, but life led him in a different direction.  After a humble upbringing and graduating from Onsted Community schools, Soldano had to choose between going to West Point or Western Michigan. Knowing his love for football, the Colonel steered Soldano away from the military academy. Garret ended up playing five years of ball for the Western Broncos and then a short stint for the Chicago Bears.

Soldano admits, through it all, he still wanted to serve in some capacity. “I had a void because I hadn’t served, didn’t put on the uniform. It was always hanging over my head, so much that I tried to get into the reserves and I was told I was too old!” He laughed and protested, “I can still do the push-ups and still run,” to no avail. His disappointment stung. “Looking back, I was hurt because I wanted to serve the people, the flag, and the country.”

By this time in his life, Soldano had earned a criminal justice degree and gone to the police academy. However, he confided, “my heart wasn’t in law enforcement anymore. I was at a crossroad and I had to figure out what I really wanted to do.”

He sought out his mentor and chiropractor, Dr. Edward (Butch) Plentz. During high school, he had worked at Plentz’ office doing odds and ends and Plentz had helped with his football training. Dr. Plentz’s advice to Soldano was succinct: Follow your heart.

“Those words kept me up for the next two weeks,” Soldano admitted. “I kept thinking and praying about it.” He knew he wanted to help people become better versions of themselves. Then, he had his epiphany – “I want to be a chiropractor.” 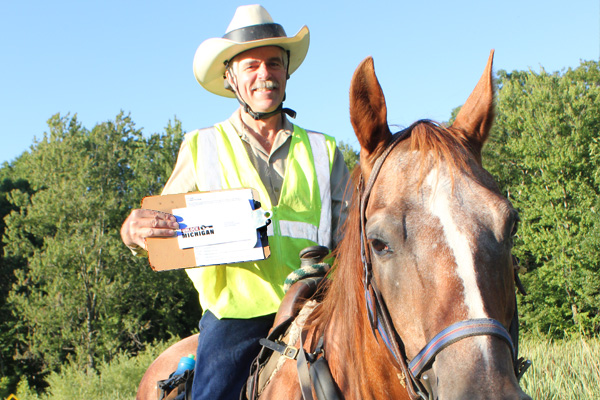 Jack Griffes (local farrier) and roping horse TJ, make the rounds to discuss the 1945 executive powers law. “We have to bring the checks and balances back in line with the Michigan constitution. Everybody wants to talk to you if you are on a horse, and when they find out I’m an independent, we have a real talk. Even some extreme liberals have signed the petition by the time we are done.”

This presented a huge challenge. He openly says, “I’m not the smartest guy out there, but I want to learn. I research. You need to educate yourself as well. Don’t be a lemming. Question me. Question professionals. Question elected officials. We have the right to do that.”

He tries to live by two rules: always do what’s right and always tell the truth. Soldano also explained, “I always try to get better in some aspect every single day—one percent better. I challenge everybody to get better on this beautiful cosmic journey we call life.”

Soldano has always been spiritual, but he became Catholic to marry his wife Jennifer and found that he loved it. “I’m a ceremonial guy – I love mass and the celebration.”

True to his form, he sought books to learn more about the faith. “I then realized the miracle of the mass. I feel like a knight when I take communion.” He admitted that of all the governor-ordered restrictions from COVID-19, shutting down the churches perhaps hurt the most. “People need hope – me too.”

Jennifer, Garret’s wife, is credited with being his better “3/4.” They met at Western, where both were athletes and competitors. He laughed saying, “She beats me at everything—bowling, golf – she keeps me humble.” When asked what they do for stress relief, he mentioned occasionally getting out with friends, taking walks, spending time with the kids – watching the boys play lacrosse. “We are in the parenting mode and it gets better every single day.”

In asking about messages to send out to his former hometown Soldano grinned wide: “I’m a Wildcat through and through,” and the advice he gave was one of encouragement: “Never ever think that you can’t make a difference.  The power of one can lead to the power of many. If you have the power inside of you to stand for something, then just do it.”

Soldano did admit that there is a heavyweight the responsibility carries in spearheading the effort to rescind the 1945 executive powers law. “It’s humbling. I question, am I worthy to be in this position? To lead?” 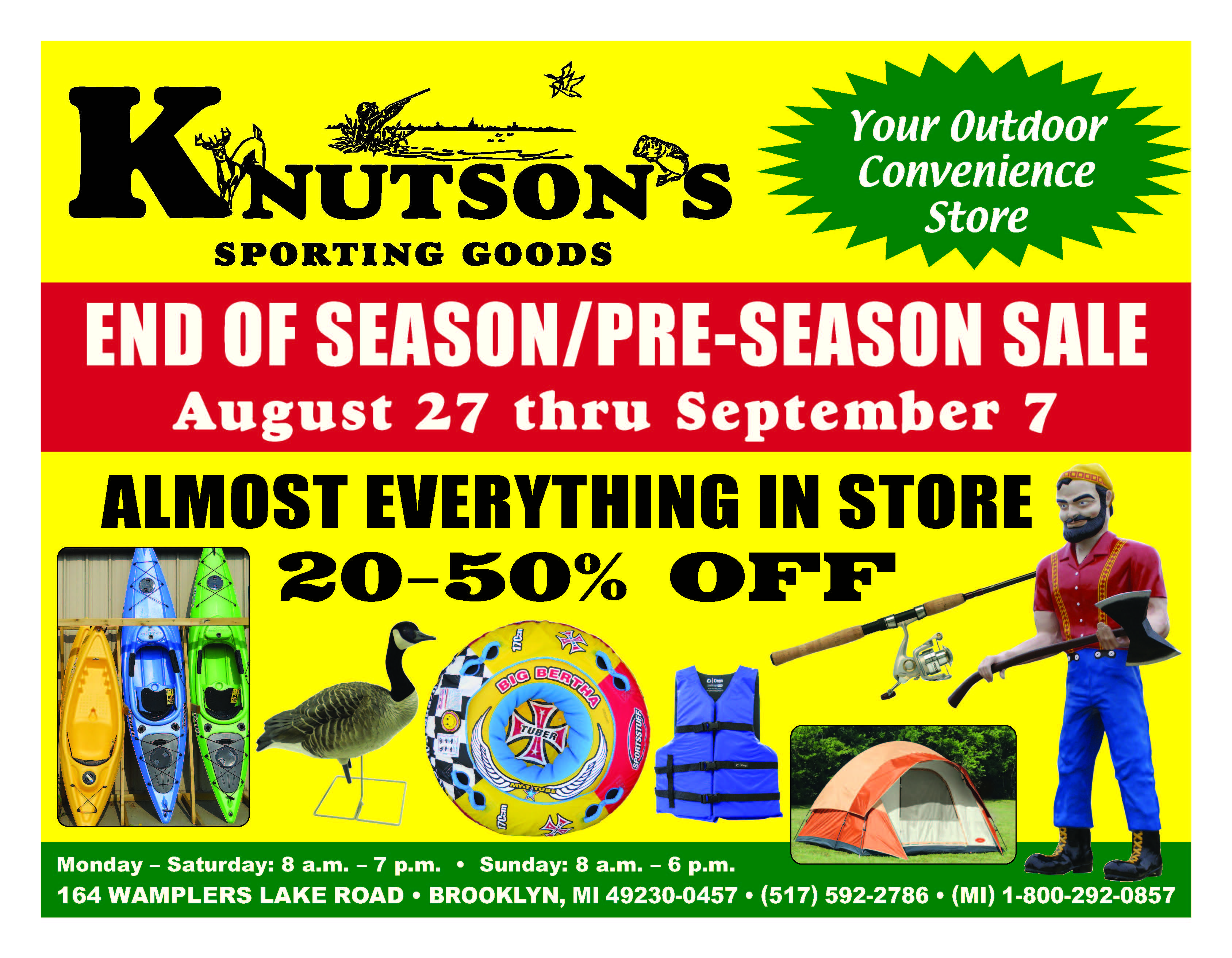 But, he thanks God for putting him in the position and strives to do his best every day.

While he didn’t start out to build a legacy, it is happening. “My sons are going to say, ‘Dad stood for something. He wasn’t perfect doing it, but he continued to do it.’”

“In the beginning, no one knew what COVID-19 really was,” said Garret. “The state goal became about flattening the curve.

“I was all for it! Do what we needed to protect Americans and save lives.” He also stated he always recognized it as a real virus and acknowledged its deadly potential. Yet after a time, death numbers came down, the curve was flattened, and the impacts of the shut-down began devastating lives for different reasons. “The catastrophic consequences of the decisions elected officials made shouldn’t be bigger than the virus itself. And that’s what is going on,” he emphasized.

Stand Up Michigan (his grassroots organization) is focused on “Unlock Michigan” which is in the middle of a statewide petition drive. The main goal is to repeal the 1945 executive power act. “No governor should have this power to extend, to extend, and to extend [a state of emergency] without working with the legislature.” If the 1945 Executive Power Act is eliminated, the governor would not be totally stripped of power. The 1976 act will still allow Michigan’s governor to declare a state of emergency, but only for a limited time (28 days) and then require the executive and legislative branches to work together.

As of August 19, 300,000 petition signatures had been scanned for properly completed information as legitimate registered.

The movement also plans to continue holding family-oriented freedom festivals across the state to unite and encourage the people.

“Our movement leans a little right, right now. But we would love anyone to join this movement—if you love the constitution. The old school Democrats, the JFKs are saying, ‘you guys speak the truth and I want to be part of the movement.’  We have the energy of the people to restore the country back to ‘we the people.’” As of August 19, Stand Up Michigan has 1.44K subscribers to their YouTube channel. 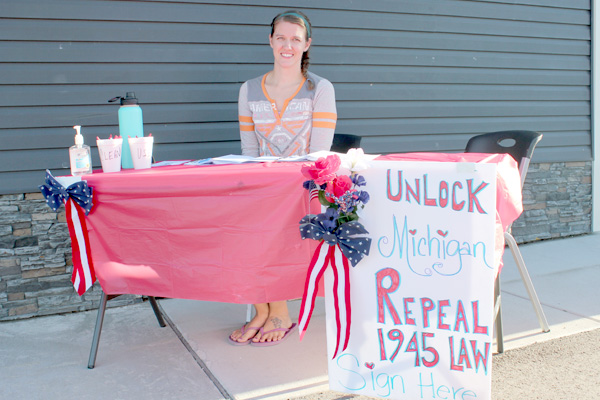 Sarah Polyblank, homemaker, set up to gather signatures outside of M.S.T. Dance Center. When asked why she was involved she shared, “My husband and I wanted to help in any way we could. Some boundaries are being overstepped.”

Soldano admits at the start “I wanted to stay in the background because I was afraid of the social backlash of what could happen when you come out and stand up.” He says his involvement with the movement has not helped his career in the least.

His business has been attacked, smear articles have labeled him as a militant, and fake testimonials have been left on his business page. “The last four months have been overwhelming. People calling, giving you death threats, telling you they are going to do bad things to your children – it gets to you – it gets to my wife – but we put our faith in God that everything else will work out.”

Of recent attacks, Brad C. (last name not given on the site) started a petition hoping the Michigan Department of Licensing and Regulatory Affairs would revoke Soldano’s chiropractic license under the claims that he had created “COVID-19 misinformation and anti-social distancing group.” Then, Wednesday night, August 19, someone vandalized his clinic sign. His Thursday video showed the damage and asked people to not give up because of fear. At that point, one of his sons interrupted the filming to ask, “Why are they attacking us?” Soldano hesitated and then responded, “because we are standing up.”

Soldano admits regarding his yearning to serve, “I got what I wished for, in a way, but now that’s it’s happening, I don’t know what the end game is.” But he remains confidant, “The path will be revealed to me when it is supposed to. I pray on it, let go, let God. After this, I will sit down with my family and see what I should do. I’ve taken a lot of arrows but I am stronger for it.

“Everybody who knows me knows I have a big heart and I just want to help people.” In the meantime he redirects himself to ‘stay humble, be authentic, be truthful, be persistent, and pray Psalm 91 everyday’ to protect himself, part of which reads:

“He will cover you with his feathers, and under his wings, you will find refuge; his faithfulness will be your shield and rampart.

You will not fear the terror of night, nor the arrow that flies by day, nor the pestilence that stalks in the darkness, nor the plague that destroys at midday.” 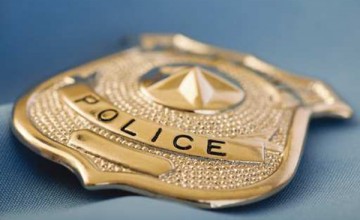 July 17, 2021 Police say three men died inside a trailer due to apparent carbon...