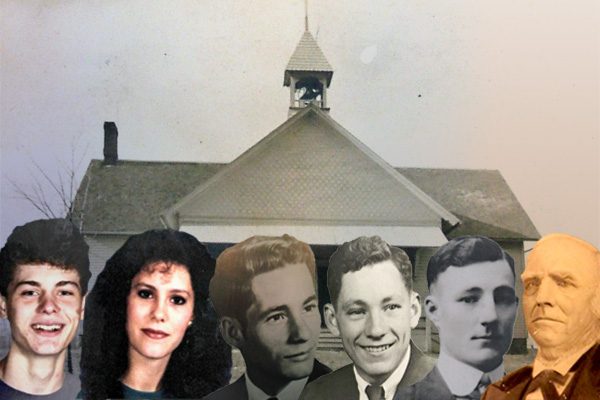 Above, From left: Cameron Connett, son of Heather and George and 2020 Onsted graduate, Heather Wooden Connett, daughter of Michael and Joy and 1994 Onsted graduate, Michael Dale Wooden, son of Dorman and Olive graduated in 1971, Dorman Dale Wooden, son of Charles E. and Agnus, graduated in 1946 at Onsted, and Charles E Wooden, great-grandson of Robert Wooden, and first Wooden to graduate 12 grades in Onsted schools.

What keeps a family in one location for multiple generations? How far can one man’s character and vision influence the lives of numerous descendants that follow? Take a short drive west of the Onsted village in the early morning. Watch the light fog nestled in the farm fields, the deer lazing across the road from field to field, the sunrise glowing across the farm roofs, and you may begin to understand. From the Wooden Sesquicentennial Farm on Hawkins Highway, this area continues to look like a good place to call “home” regardless of the year.

The year was 1845 and the man was Robert Wooden, age 33, who moved his wife, Lydia, and four children from New York to Michigan to establish a new life in the new frontier. Records vary on the amount of education Wooden himself attained, but the Franklin S. Dewey scrapbook accounts record him as “not only a good farmer with broad acres, but a thinker and a preacher with broad ideas. It was a pleasure and a felicity to listen to his sermons . . .” Notwithstanding, Wooden had the means and drive to fund the building of a stone schoolhouse just north of his property. It would become a family rallying point for neighbors and many of his descendants. 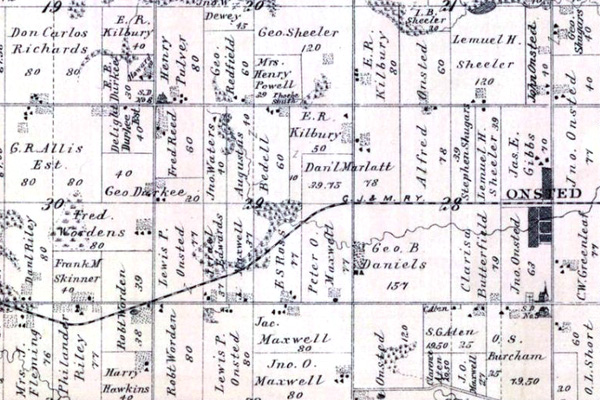 A branch of the Michigan Ohio Railroad was completed in 1883, giving settlers reason to build the village of Onsted. “The line would connect Tecumseh, Adrian, Onsted, Manitou Beach, and Marshall” recounted Schultz in 1957.

The 1874 Cambridge Township plat map shows Wooden’s initial property on West Hawkins, crossing Slee Road. It is this track that the Lake Shore & Michigan Southern railroad crossed bringing growth to what eventually would be the Village of Onsted.

“The Onsted railroad was completed in 1883, the last spike being driven near the home of the late Robert Wooden.” – Mrs. J.S. Kane Reminisces, Daily Telegram 1924, August 16.

By the 1890s, Robert’s wife Lydia and son Charles Graves had both been laid to rest in Onsted Maple Shade Cemetery – Lydia from “general disability” at age 71 and Charles from unexpected breathing difficulty one night after he had recovered from pneumonia. His Weekly Press March 21, 1890 obituary cited him as “a prominent citizen and well-known stock dealer.” 1897 would bring the patriarch (Robert’s) passing, but he would have witnessed his grandchildren branching out and staking claims for themselves in the area.

Charles’ son, Frederick, had attended Wooden school and married Susan Johncox in 1893. Together they firmly established 80 acres just north of Robert’s land between Slee and Stephenson roads, the 1893 atlas confirms. This land would become a multi-generational farm and the second state historical site attributed to the Wooden descendants.

It was Fred and Susan’s son, Charles W. Wooden, who was the first Wooden to graduate from eighth grade from the Wooden stone school and then be encouraged to attend the Onsted Union School from 1914 to 1918 where he became one of three students in Onsted’s first 12th grade graduating class. 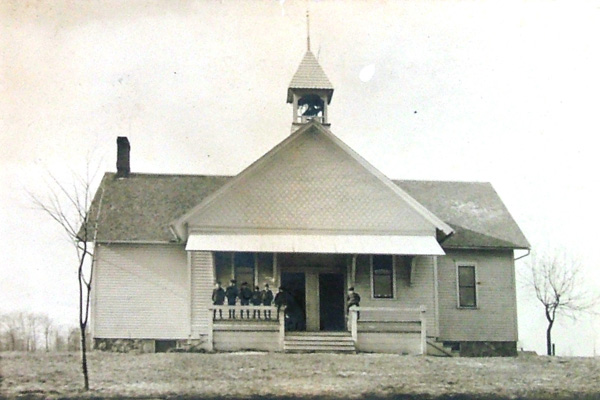 Onsted school at the corner of Slee and Onsted highway graduated its first seniors in 1918. There were three of them. Unidentified children in photo.

The feat was impressive for several reasons: Most families were happy if their child completed the “normal” years of eight grades. Add to this that Onsted School was roughly three miles one way from home. Now the question is if the family let Charles ride a horse and leave it tethered for the long day, dropped him off each morning and picked him up in the evening, or if he walked there and back which places walk time between 45 minutes to an hour one way. Finally, Charles’ father was working an 80-acre farm. Joy (Ruttkofsky) Luck, formerly Wooden, wrote, “I ponder on this as the Woodens were farmers and every young able son was needed on the farm to work.”

With his extended education, Charles could have gone anywhere and done many things, yet he chose to marry local Agnes Shultis, and raise dairy cows along with their children, Dorman Dale, and Ruth. Both children graduated from Onsted. Dorman, commonly called Dale, graduated in 1946. OHS Yearbook records show Dale had been active in 4-H, FFA, the junior and senior play, baseball, and military training. Dale would marry Olive (Davies) and start his family on Slee Road.

Dorman Dale’s son, Michael Dale, would make the third generation to graduate 12 grades from Onsted. During high school, he was involved in FFA, cross country, track, football, and wrestling.

According to Wooden family lore, grandson Frederick’s home, halfway between Slee and Stephenson, was built in the 1870s with additions on the back added in 1913. The house had a wood stove for heat and a cookstove for the kitchen. In the corner, there was a crock connected to the windmill outside. A lever could start and stop the windmill pumping water into the crock. But as far as conveniences, that was about it. At some point, electricity was added. 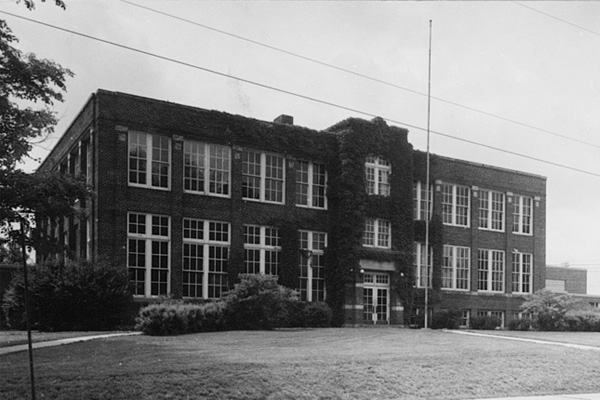 Dorman Wooden graduated in the brick, two-story Onsted school building originally built in 1928, for grades 1-12, complete with library, science laboratory, a small gymnasium, and to the side, a stage. By the mid-1940s a separate structure for kindergarten through third had been built.

Yet, it wasn’t until the early 1980s when Michael and Joy Wooden bought the farm, and that an indoor toilet was added to the house features. Relatives Glen and Lavere Wooden had grown up there and lived as bachelors until their passing into the long accustomed rustic life.

By the 1980s, the farm had 36.26 acres of tillable land, 24.4 acres of woods, and roughly 17.49 acres of pasture according to Cambridge Township assessor records. This fit Michael well according to daughter Heather: “Dad enjoyed his pulling horses.”  Heather recounted working a farm in the 1980s wasn’t necessarily easy work.

They walked the fields and picked up rocks each spring. “We loaded them on a stoneboat which the Hefflingers pulled,” clarified Heather’s mom Joy. And they would use the horses instead of a tractor to cut and carry wood for the furnace. Heather recounted, “I was the oldest and there were no boys, so I stacked a lot of wood.”

But it wasn’t all work. Heather remembered that after the family would return from church, she would duck into her room to change clothes and then avoid the kitchen and sneak out a side door so she could roam free in the fields without having more chores right away. “I loved the smell of fresh hay, fresh tilled earth,” she shared.

Heather graduated from Onsted in 1994. After marriage to George Connett and a short stint in the cities of Tecumseh and Addison, Heather (Wooden) Connett returned. When asked why, she said, “I needed to go back to the country – back home.”

Besides raising three boys, Heather is a manager at Woodstock Wine and Cheese, works at Country Market, and until its recent closure, worked at the Onsted Community Fitness Center.

Heather shared: “I really enjoyed my time working with elders, rangers, and vets.”  Also, from a young age, Heather helped her mother, Joy, with care of the Wooden School fundraising projects.

Heather’s son, Cameron Connett, is the fifth generation of Woodens to graduate from Onsted schools, though numerous other relatives attended. He has two younger brothers who are soon following in his footsteps. 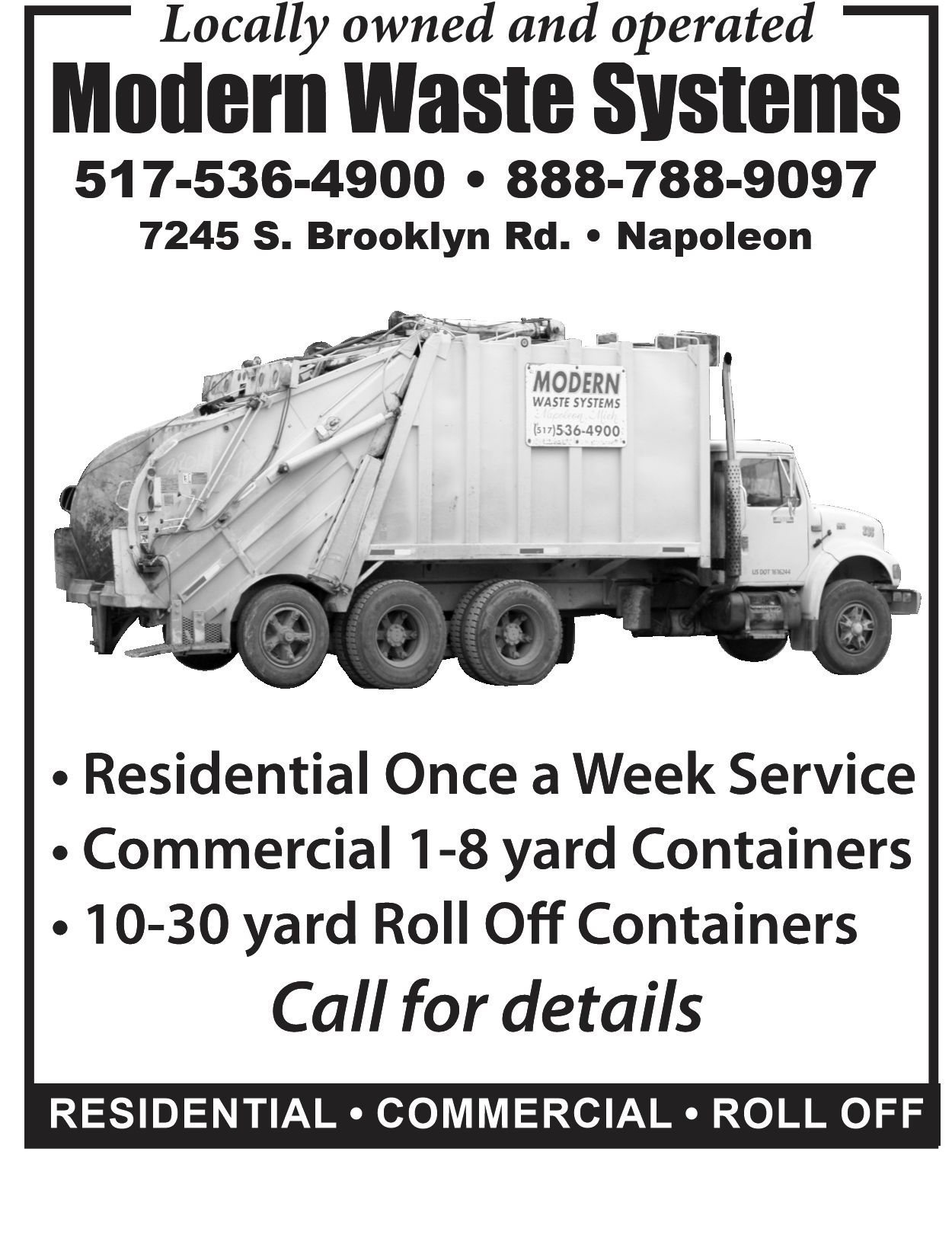 Cameron attended the Lenawee Tech Center for part of the school day. He was captain of the robotics team this year and was excited that the team competed at Kettering University. This gave him time to check out the school where he plans to attend in a few short weeks. He credits his interest in technology to Onsted’s PLTW teachers – middle school teacher Jason Hunt, and Tech Center leader, Josh Wonders. Cameron has an agreement with Neapco for an internship in January 2021. Neapco is a leading supplier of driveline solutions in Farmington Hills. Cameron credits his cousin, Billy Ruttkofsky, for not only mentoring him with auto bodywork but also to use YouTube to teach himself how to fix cars to flip.

In addition to being the fifth generation to graduate from Onsted schools, Cameron is the first of his descendants to receive his diploma without wearing pants! As the 2020 OHS class received their diplomas while driving their cars around MIS, Cameron planned to give OHS Principal Kevin Ohrman a good laugh. Despite being told all students should dress nicely under their caps and gowns, Cameron opted for comfort with just his underwear. After receiving the diploma, he shared with Ohrman the request violation but had already painted it on his car windows as a parody of the No Mask, No Service COVID-19 bantering that had caused the cancellation of the traditional graduation ceremonies. During the stay-at-home orders, Cameron also started a service to collect bottles and cans that were accumulating and being dumped along the roads due to the closure of the bottle return locations.

Cameron’s grandmother, Joy, credits the Onsted community as the reason so many folks stay or choose to return after stints away to see “the world.”

“First, it’s like winning the lottery – a privilege to be born in the USA,” she says. “Then, to grow up in a community that supports the folks that live here. These are the folks who helped to build your barn or house after it burned, cut your wood for the winter if you were ill, take your crops out of the field if you needed help, and dropped off meals to those in need.”

Will Cameron stick around Onsted to make a sixth Wooden generation of Wildcats? It remains to be seen. Sometimes the lure of the distant sirens is great. After college, right now, the vision of working for a company like Tesla has appeal. Still, it is usually in hindsight when we discover all roads lead to home.