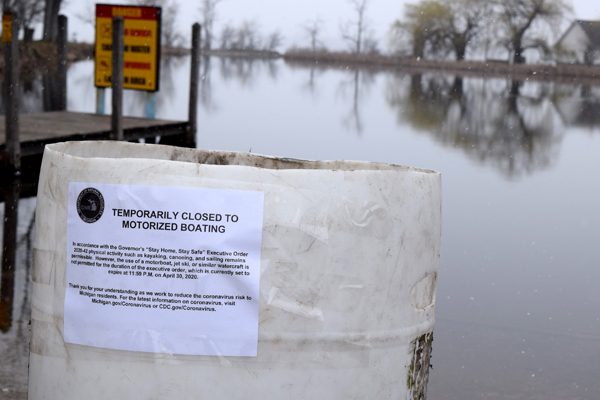 117
SHARES
Share
Above: the boat launch was quiet at Hayes State Park at Wamplers Lake today. Officials there posted signs notifying residents that no motor boating is allowed on the lake, per Gov. Whitmer’s executive order.

Wednesday, April 15, 2020 was a quiet, snowy day in Brooklyn and the Irish Hills, with little traffic and most businesses remaining shuttered.It was not quiet in Lansing, however, as thousands descended on the state capitol to protest Gov. Gretchen Whitmer’s latest executive order that tightens restrictions on what residents are allowed to do under the stay-at-home order.

Perhaps the most controversial point of the order – at least for people in our community – is the disallowing of motor boating. This hits the Brooklyn area especially hard, as we have 54 lakes within minutes of the village, and boating makes up a large part of our economy and recreational activities.

One business tuning in closely to the proceedings is Knutson’s Sporting Goods, which sells bait not just in Brooklyn, but supplies outlets around the region. Owner Tom Knutson said he understands the initial shutdown, but believes the tighter restrictions recently imposed by the Governor are too much.  “You mean to tell me that you can put in a rowboat, kayak or canoe, but not a motorboat? Let’s be real about it. This smells like the Green New Deal,” said Knutson.

The complaints are growing louder against the Democratic Governor from leading Republicans at both the state and federal levels of government, as well. Sen. Mike Shirkey (R-Clarklake) cites a list of complaints in an interview with Bridge Magazine that can be read here.

Indicentally, Knutson and Sen. Shirkey spoke on the Jamie McKibbin Outdoor show on WKHM in an interview that can be heard here. “We can buy weed, but we can’t buy seeds,” said Shirkey in the interview. Congressman Tim Walberg also posted his take on the situation in the video below on his Facebook page.

Congressman Walberg speaks out about Governor Whitmer’s executive order while rowing on Wamplers Lake. “I support my governor in defeating coronavirus,” notes Walberg, but appeals for her to rethink her most recent order.

Are you missing the theater? We are too!

But there is good news for fans of the Croswell Opera House in Adrian. They will be begin performing Streaming Sundays starting this weekend on Facebook.

Each Sunday at 7 p.m., officials will select something from the Croswell archives to stream live on their Facebook page. Here are the first three shows on their schedule:
April 19: 150 years at the theater
This show was performed in September 2016 to mark the Croswell’s 150th anniversary. Narrated by four of the Croswell’s ghosts, it tells the story of the Croswell’s first 150 years — from its earliest days as the Adrian Union Hall through the movie era and its revival as a home for live theater — through song.
April 26: The Family Digs
A renowned archaeologist with a strange malady, his flaky New Age son, and his long-suffering daughter form the nexus of this two-act comedy by Adrian native Terry Hissong. This play debuted at the Croswell in October 2017 and was voted the region’s best play of the year by the readers of BroadwayWorld Detroit.
May 3: Obsession
This musical by Adrian’s Michael and Betsy Lackey is a new take on the classic Frankenstein story. In Obsession, which premiered at the Croswell in 2011, Victor Frankenstein creates his monster from the body of his brother Henry after Henry is killed in an accident. The result is a fascinating story about family and the thin line between obsession and madness. 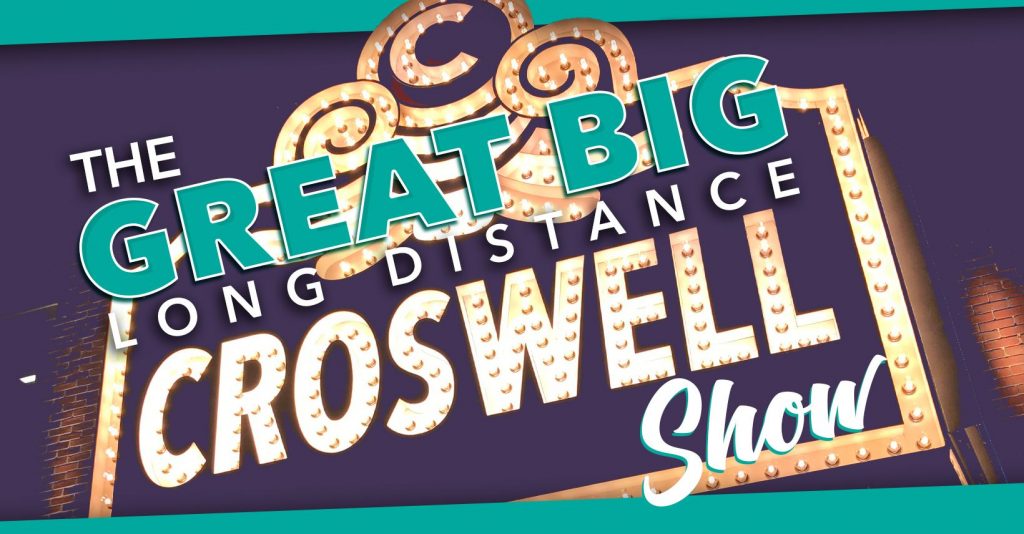