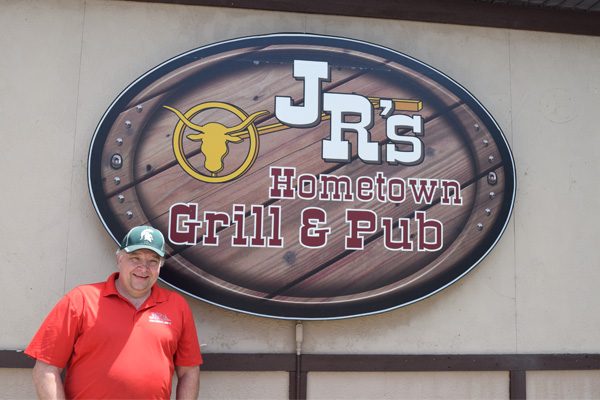 Above: JR’s Hometown Grill and Pub general manager Steve Clemons is happy to be serving customers once again.

“The most important thing is that your customers and employees feel safe. We’re excited and ready to get the ball rolling.”

Restaurants and bars are open to dine in

The day that many people across the state have long awaited – to once again dine and drink inside a restaurant or bar – finally got here this Monday, June 8. Restaurant owners throughout the area couldn’t have been happier when they heard the news of Governor Gretchen Whitmer’s executive order that was announced June 1 to allow them to open inside and outdoor seating for their customers.

Restaurants and bars were closed to indoor and outdoor seating on March 16, 2020 near the start of the COVID-19 coronavirus pandemic. On that fateful day Gov. Whitmer issued an executive order placing “temporary restrictions on the use of places of public accommodation” which included bars and restaurants, as well as most other places where the general public gathered.

From that day until this Monday, restaurants, bars, and similar food and beverage venues were forced to service customers using delivery service, drive-through or drive-up service, and various forms of carry-out or curbside service. Some restaurants and bars decided to close during the almost three-month period.

On June 1, Gov. Whitmer issued Executive Order 2020-110 which moved the state to Stage 4 of the Michigan Safe Start Plan. The order states, in part, that unless otherwise prohibited by local regulation, restaurants, food courts, cafes, coffeehouses, bars, taverns, brew pubs, breweries, microbreweries, distilleries, wineries, tasting rooms, special licensees, clubs, and like places may be open to the public . . . [operating under the state’s guidance].

All of the above categories of food and beverage venues may now open for outdoor and indoor seating, subject to capacity constraints and workplace standards described in Executive Order 2020-97 or any order that may follow from it.

Area restaurants and bars will all be following the governor’s executive order directives and Center for Disease Control (CDC) guidelines as they reopen their seating areas. Limited seating, shorter hours for the time being, keeping an eye on patron counts, and extra sanitization measures are things most area restaurants have in common. 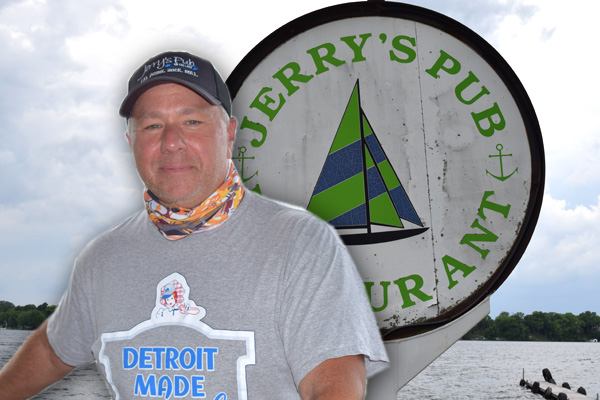 “The most important thing is that your customers and employees feel safe and have a great dining experience,” said manager B.J. Andonian, shown above. “We’re excited and ready to get the ball rolling.”

Unfortunately, due to too many health risks involved, Jerry’s will not have entertainment this summer.

B.J. welcomes input from other restaurant owners and managers to share ideas and come up with plans for the entire area. Learn more about the restaurant’s happenings on Jerry’s Facebook page.

At Big Boy restaurant in Brooklyn, owners Dong and Ly Huynh are excited to open up again. 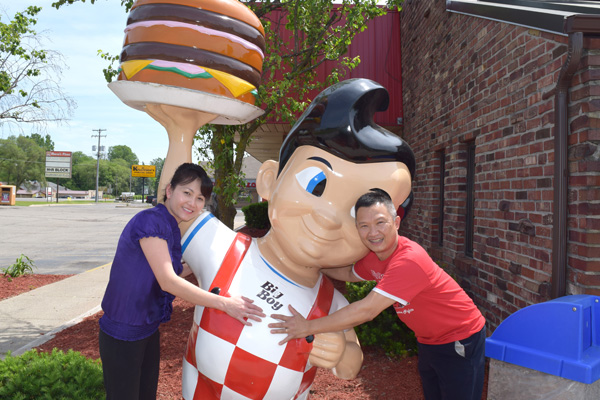 Ly and Dong Huynh are so happy to reopen their dining area they hugged the Big Boy!

“It’s been a long three months. We need to open up. We’ve got bills coming in,” adding that the COVID-19 closure hurt their business. They had opened their restaurant for a couple weeks in late March for carry-out only before the coronavirus hit the Brooklyn Post Office. They then closed down. The Huynhs also own the Big Boy in Chelsea.

“We’ll see how it goes,” he said. “I don’t know how busy we’re going to be.” Some customers have requested that they open earlier due to their popularity as a favorite breakfast restaurant of many people.

Dong acknowledges that things will be different with a lot of things changing. For example, they switched to shorter, smaller, paper disposable menus as an additional sanitary measure. Old favorites like the brawny lad and swiss miss that are not on the menu may be requested, he said.

All employees will get their temperatures taken before being allowed to work.

“We’ve made it as safe as possible and follow the CDC guidelines,” Dong said.

“We hope to see everybody back again – a lot of customers are excited. We’re going to go for it!” 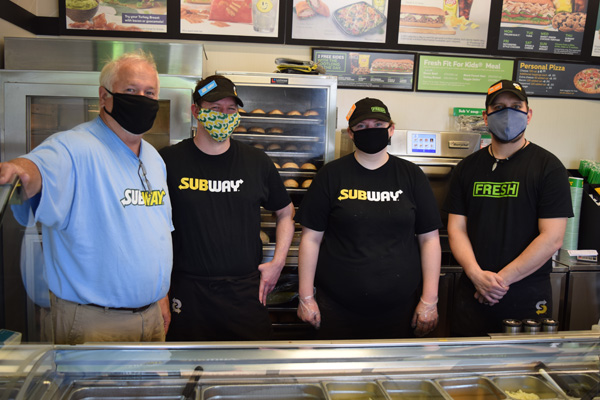 Subway owner Bob Richardson and team are masked up and ready to serve customers.

For Bob Richardson, who owns several Subway restaurants throughout the area, the news is good for some locations, but still problematic for others.

“Some of my stores will not have room to put in any seats that maintain all the rules to have the six feet and all that stuff,” he said. “There will be stores we have enough room in, like Michigan Center, that we will put seats in. Brooklyn will get a couple sets of seats put in as will Napoleon.” However, seating will be very minimal, he said. “I know I won’t be at 50 percent.”

Nonetheless, Richardson is positive about the announcement.

“We’re excited to have everything opened back up,” adding he’s happy for other restaurants as well.

Diane and John Behrman own Shugar Creek Restaurant in Onsted. During the crux of the pandemic, they stayed open for carry-out with limited hours. 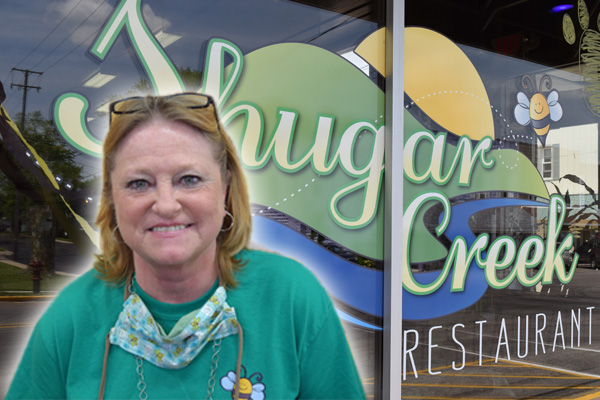 “Things are going great – our community has been so supportive,” Diane said. “We appreciate it so much. We need a nice restaurant in this town. The community loves us, and we love them. It’s a win-win situation.”

Diane doesn’t really know what to expect when they open their dining area.

“Are they going to flood in here or are we going to stand around twiddling our thumbs? We’re just going to kind of play it by ear

Executive Order 2020-97 includes a list of 16 requirements specific to restaurants and bars (among other categories of workplaces) that must be followed. Key requirements include the limiting of capacity to 50 percent of normal seating and requiring six feet of separation between parties or groups at different tables or bar tops (e.g., spreading tables out, using every other table, remove or put up chairs or barstools that are not in use).

“We’re excited to be reopening – that’s for sure,” said Steve Clemons, general manager of JR’s Hometown Grill and Pub in Brooklyn. “Hopefully, we get some support from the community – come on out and visit us!” The restaurant has been closed since mid-March. (More below)

This feature is courtesy of: 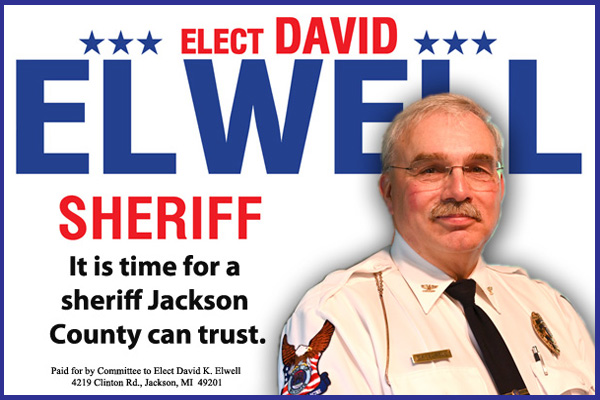 “If things go well, we’ll do adjustments [of hours] as we can,” noted Clemons. “We don’t know what to expect – we’re walking into this basically blind to see how people react coming back out to dinner. Everybody is probably tired of cooking at home.”

Clemons plans to have enough staff on to cover if they get busy.

“It’s a different world we live in now – it’s going to be a little bit challenging,” he said. “But we’ll be ready to go full swing.”

Other important aspects of the governor’s executive order include the closing of waiting areas and asking customers to wait in cars for a call when their table is ready, the closing of self-serve food or drink options, such as buffets, salad bars, and drink stations, limiting shared items (condiments, menus, etc.) and cleaning high-contact areas after each customer (e.g. tables, chairs, menus, payment tools, and condiments). Face coverings are required to be worn by employees handling food and hosts and servers, and by customers until they get to their table. 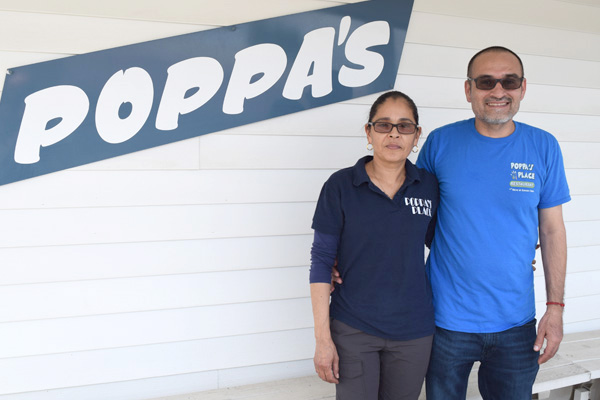 Poppa’s Place restaurant in Brooklyn, owned by Pedro and Mary Hernandez, will also see shorter hours for the time being. They will be open Tuesday through Saturday from 8 a.m. to 6 p.m. and Sundays from 8 a.m. to 2 p.m. The restaurant will be closed on Mondays. Their second location in Manitou Beach will have different hours.

They have been closed since the pandemic hit in mid-March and were hurt by it.

Though it is normally a tightly-packed restaurant when busy, seating customers will still comply with CDC guidelines.

Poppa’s Place has kept their same full menu intact and will also be utilizing throw-away paper menus for the time being. The menu may change, Pedro said.

“It depends on what food we can find – on the supply,” he says.

Like other restaurant owners, Pedro is excited to be reopening.

“I love the restaurant business,” he said emphatically. “I want to keep working, just like normal.”